Basilisk is a game of skill between two opponents, employing a unique game play. In the version you are using you control a snake in deadly combat with another snake.

But these are not ordinary snakes. They are the highly venomous basilisks, which reputedly live in caves below the Gerberbrunnen in Basel, Switzerland.

The game controls are respectively a skill level toggle with three ascending skill levels, a language toggle, four direction buttons represented by arrows, a help button, and a reset button, which starts a new game.

You are the basilisk emerging from a cave at the top left of the game board. You start the game by choosing an arrow to show which direction you want your snake to move.

Your opponent is the basilisk that emerges from a cave at the bottom right. You alternate in taking turns to move your snake forward, either left, right or straight ahead. You cannot move backwards or miss a move.

If you make a move which takes you out of bounds at any time, you lose. Your goal is to either land on the square of the head of your opponent's snake - a kill - or to trap your opponent so that they have no available moves left other than to go out of bounds - entrapment. Your opponent has the same objectives with regard to you. If you land on a square adjacent to their head, or you land on a square where there are unused sections that would connect to their head, you will die!

As the path of the body of the snake is extended, the move is represented on the board by a piece which shows an extension of the snake, and a grey segment. The grey segment represents an unused snake body section. 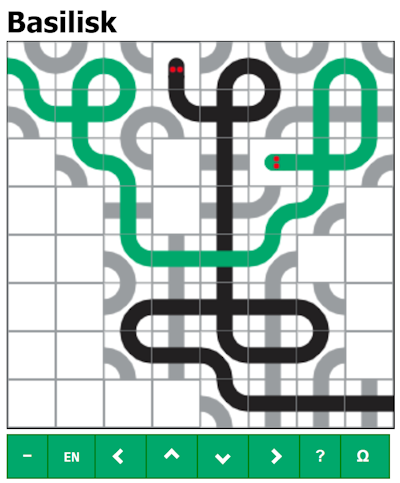 If a move you make attaches to such an unused body section, your snake absorbs it and is extended beyond it, enabling you to extend your move beyond an adjacent square. If there are more than one contiguous unused body segments, the snake absorbs those too. Both snakes may move through any available unused body segments that either snake has created, and may move over or under their opponent. A kill is only achieved by making a move which enables you to land on the head of your opponent.

If you have a keyboard you can use the arrow keys on the keyboard instead of the arrow buttons.

You can also move by pressing on the game board to make a move.

If you want to see where your moves will take you, or those of your opponent, at any time, click on or touch the relevant snake head.

You can only change the skill level at the start of a game, before your third move.

If you win you will receive a star rating. You get one star for each skill level you played the game with. You get an additional star for a kill, as opposed to entrapment. You also get stars if you achieve a win with very few moves, if you complete the game with a low average time between goes, if you are able to extend the game to almost fill the board, or if you don't look to see which moves are available to you. 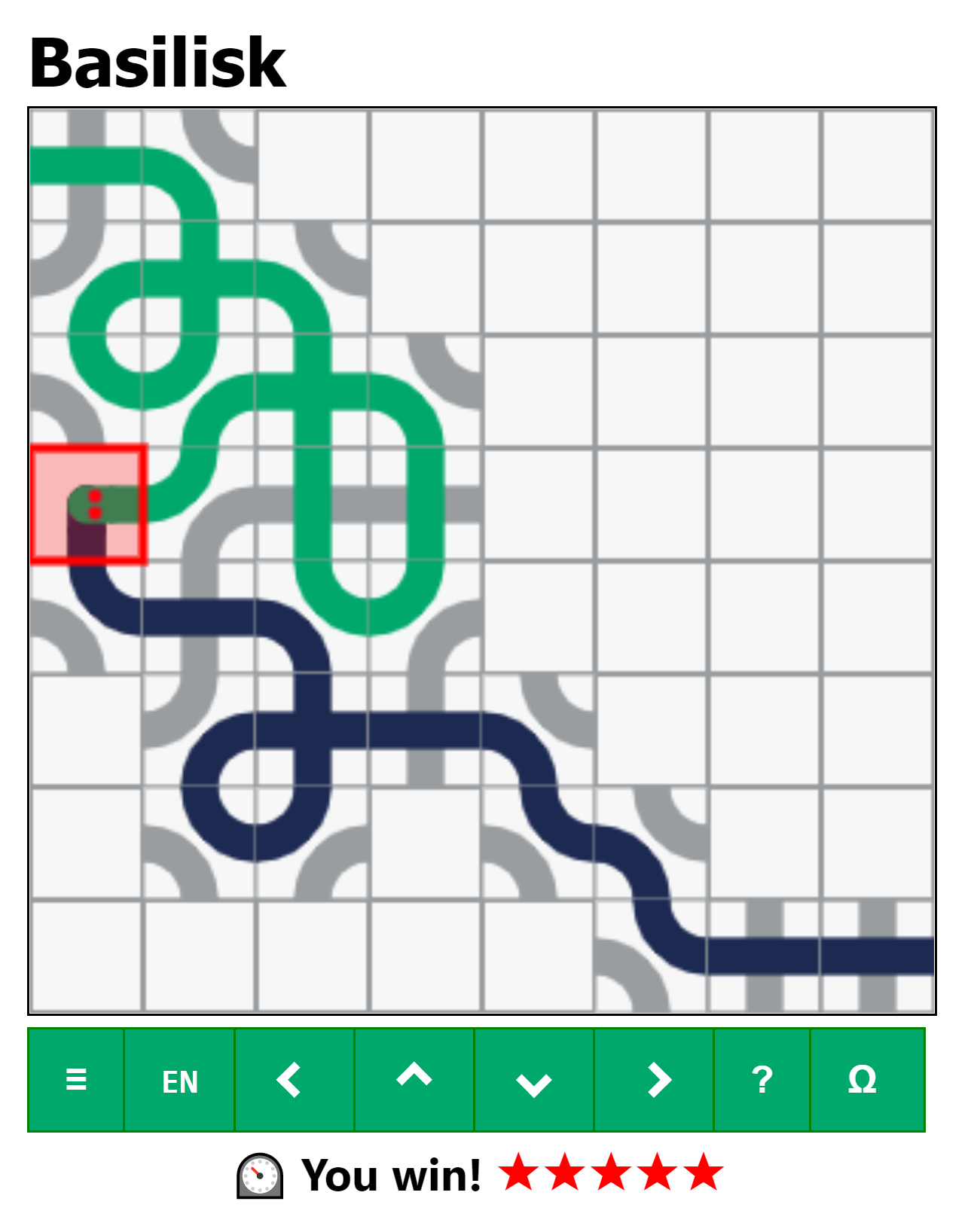 Leaving segments where you can traverse over yourself later in the game will help avoid you playing at a disadvantage.

At the lowest skill level the snake is somwhat myopic and easier to contain than to kill. You can set traps by luring it into a part of the board where it cannot escape or where it can only move into a square where you can kill it. The longer you can evade being killed the more opportunity there is to win by containing your opponent.

Often the initial moves of your opponent offer insights into how to win the game. Sometimes, at the lower skill levels, it might make it easier than at other times.

The canvas for Basilisk is optimised for most displays. If you want to make it larger or smaller, your device's browser should permit this. e.g. in Chrome, select settings and press the zoom + button. On a phone you can usually use two fingers to do so.


Please feel free to provide any comments to the author here.